As coaches, we have a suitcase full of tools and are constantly developing new ones. However, if we were to talk about minimalism in team coaching, I’m convinced that one tool alone would have the power to transform the world and improve the way in which human beings relate to each other.

Below, I will refer to this powerful instrument as the “Team Contract” but, as we say in Scandinavia, “a beloved child has many names” so it could also be called “Team Alliance” or “Team Charter” or any other name that best suits your particular circumstances.

Although this concept is traditionally used within a business context, the same instrument can easily be repurposed for any kind of human relationship, be it private or professional.

The main purpose of the Team Contract is to identify mutual expectations and create a solid basis for alignment, trust, and constructive interaction within a team. On an organizational level, it could form an integral part of the overall strategy and the Company Code of Conduct.

The Team Contract can be created via a simple three-step discussion procedure in just a few hours, depending on the size of the team. These discussions should ideally be guided by an external facilitator to allow the team to remain focused on the content of the dialogue and to ensure an effective process void of personal and organizational bias.

Here’s how it works:

The team’s purpose answers the question “Why does the team exist?” both in terms of the end it is trying to achieve or the future it wants to create (vision) and the means to get there (mission).

The mission and vision statements should be authentic, meaningful, and inspirational to the team members. They do not need to be wholly unique, so the focus should be on getting the content right and keeping it short, preferably one sentence for each statement.

Values are critical, because they define the team’s personality and provide team members with clarity about how to behave, thereby reducing the need for inefficient and demoralizing micromanagement.

CORE VALUES: Identify a maximum of three core values for the team. These are deeply held personal principles and convictions that the team members stand for.   It is vital to choose core values for which you are already “walking the walk” and “talking the talk,” otherwise it will simply generate cynicism and distrust. A value is only core if you know that you would always hold onto it, even if the environment ceased to reward you, or perhaps even penalized you, for holding this value.

ASPIRATIONAL VALUES: Identify a maximum of two aspirational values for the team. These are qualities that you would like to have and believe you need to develop in order to maximize your success as a team.

DESIRED BEHAVIOURS: In order to cement the team values and make them tangible for future guidance, reflect on what the team values mean in terms of behavior. In other words, create vivid statements for the desired behaviour that will help you cultivate and grow the team values.

VALUE CHAMPIONS: Ensure co-responsibility for maintaining the desired team culture by nominating at least one “value champion” per team value. Being a value champion means the chosen team member has both the right and the responsibility to speak up, not only when the value is being violated, but also in appreciation whenever this value is being honored by the team in an exemplary way.

As a final and most crucial step to ensure that the Team Contract will be an effective instrument, the team must decide on which actions are needed to make sure the contract is carefully recorded and remains a living tool that is updated and referred to on a regular basis.

In this case, I would invite you to be creative and playful. Some kind of visual representation of the Team Contract that can be posted somewhere where it is visible to the whole team on a regular basis would be good. I also recommend that you make it a standard item on the agenda of your regular team meetings to reflect on where you are with regard to the Team Contract and to make adjustments, if necessary.

Having an open and honest dialogue about the team’s values and what it stand for is actually just as important as the values and the purpose chosen. An important function of the Team Contract is therefore to give the team a framework for continuous reflection and learning that helps it to stay on course. 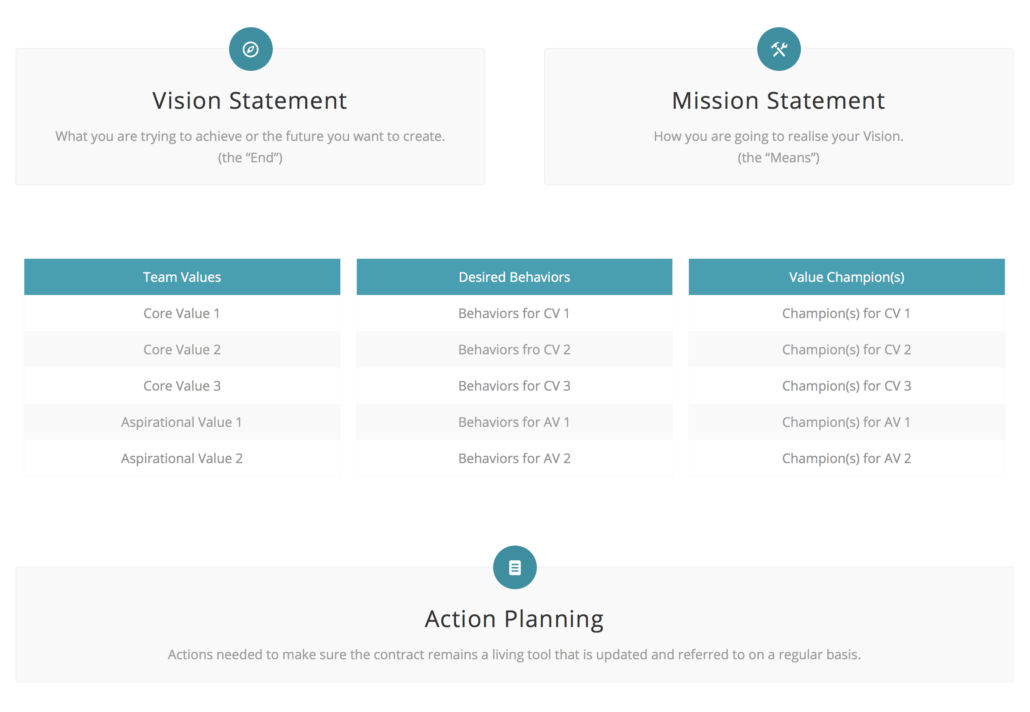 Ideally, this basic version of the Team Contract should be further enhanced with a set of mutually agreed guidelines for constructive conflict management. In my sustainable teambuilding program, I also suggest additional training concerning diversity, roles, change management, etc.

Without a doubt, the Team Contract is a powerful tool to ensure alignment, trust, and constructive interaction within a team. As such, it can even be considered the foundation for a healthy and cohesive team culture that fosters high morale, high performance, and, ultimately, high value for all stakeholders.

Imagine a world in which the Team Contract would be a standard operating procedure of every work team and every organization.

Do you think it would make a difference?

Simplicity is the ultimate sophistication.

This version of the Team Contract is inspired by various sources listed in my Recommended Resources page.

Make Work (and the World) a Better Place with Coaching

How to Eliminate Toxic Communication Patterns in Teams
Scroll to top